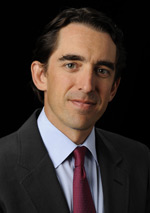 In addition to his leadership role at Evolve IP, Michael is also currently Vice Chairman of the Peter G. Peterson Foundation, combining his extensive private sector experience with his dedication to public service and the common good. He oversees the strategic direction of the Foundation, guiding policy and shaping strategy for its major initiatives, key partnerships and long-term objectives. Michael is also President and CEO of Peterson Management, LLC, which manages the Peterson family assets, including the creation and launch of The Fiscal Times, a digital media service devoted to comprehensive reporting on fiscal, budgetary, health care, and economic issues.

Business and finance have been at the center of Michael’s private sector career, but public policy and economics have also been important areas of focus for him for many years. After studying public policy and graduating magna cum laude and with honors from Brown University, Michael earned a Master’s degree in Economics from the London School of Economics. He worked on the Clinton and Dukakis presidential campaigns, served as a Congressional Aide to Majority Leader Richard Gephardt, and conducted research for both the Committee for Economic Development and the Institute for International Economics. In recognition of his significant business achievements at a young age, Michael received the “40 Under 40” award from the Philadelphia Business Journal.

Michael remains active in civic and philanthropic organizations. A former board member at the American Heart Association, he is a founding member of CGI Lead, a group of some of the world’s most accomplished young leaders selected by President Clinton to develop unique solutions the world’s most pressing challenges. Michael is also a member of the Council on Foreign Relations, and has established his own foundation, which focuses on a variety of philanthropic areas.

Michael, the son of Pete Peterson, Founder and Chairman of the Peterson Foundation, lives in New York with his wife, Tara Peters, and their two children.